Hi! For the sake of your convenience, I have divided my article into three chapters:

What Stress Test Am I Going to Run?

When we met last time, I installed a High Availability WooCommerce instance. Now the time is ripe for running a stress test and checking if the infrastructure is really HA. I thought that Horizontal Autoscaling would do the job, but surprisingly it failed. So let us get through it all and see why it happened.

I have prepared a simple stress test script for k6.io. The script imitates a behavior of "customers browsing the shop and looking for some products". I.e. the script opens a product card and requests a couple of static files, waits 2-5 seconds, and then repeats it all again. During the test, the number of concurrent users will increase and decrease to emulate "user waves".

You Can Use This Stress Test for Your WooCommerce Instance

If you want to get those neat graphs I show in the article, use these commands:

The graphs will be available on http://localhost:3000/d/k6/k6-load-testing-results

But why? Is that real? Read the Detailed Tour below, and try to guess what was the reason and how to fix it. Or wait till the last chapter (Let's Stress It Once Again: Actually Horizontal Autoscaling is Good!) for the answer.

There are several major software used for stress testing and the most well-known is Apache Benchmark. I use k6.io because of its flexibility. BTW, there is a list of similar testing software so you can pick another tool that fits you best.

I'd like to get the main page in 2.5 seconds (in 95% of all cases) and static files in 1 second. So I've applied these expectations to my script. It's OK for some requests to fail but if more than 80% of the requests fail, the test will stop because it will be pointless to continue. The 80% error rate means that the website didn't survive.

The number of users will double after 20 minutes of the test. Then in 20 minutes, it will double again reaching 40 users. The increase will be smooth - 4 minutes of the linear ramp up. The last step of the test is "RPS Wave", which means that the RPS (request per second) will rise up and down in a greater extend. I think that given the default resources, my website will not survive this load.

When my website dies, I'm going to analyze what's happened and update the infrastructure (it's easy using WSP) to get my website running despite this killing load.

You can run the script using the following command:

Git cloning is not a required thing to do here. If you want to change some parameters or change the script itself, you can use the repository: https://github.com/wspaws/woocommerce.

I've also set up a machine to visualize execution of the test (I've done it as described in this article). 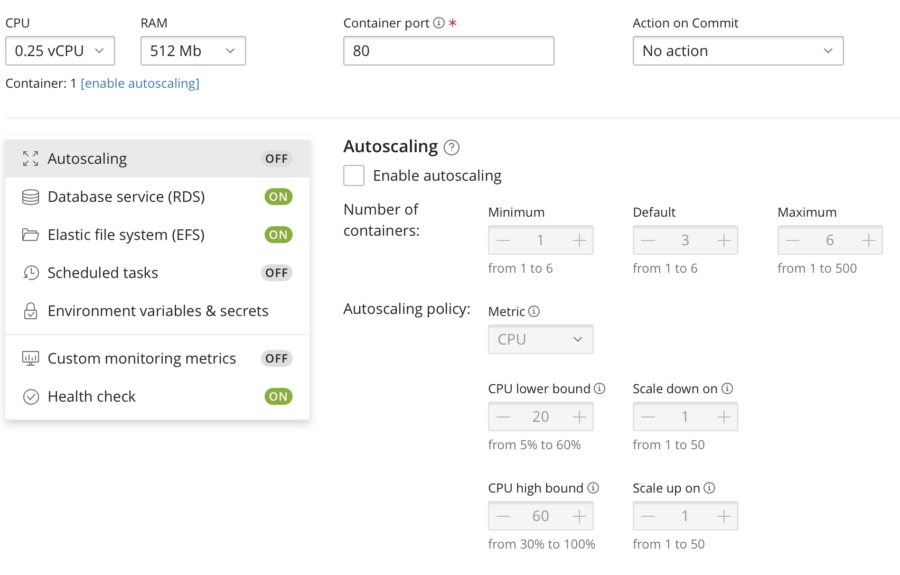 Here you can view the number of users simultaneously visiting my website as well as requests per second performed by the script. It doesn't mean that the website survived the load, these graphs just show how the stress test was going:

I need two metrics to keep an eye on. The first one is "Error rate" and the one second is "Response time". On the graph below, you can notice that the response time went bad after 17:30, when the number of users doubled from 10 to 20.

Eventually, the test stopped at 80% error rate, which means that my website did not survive. 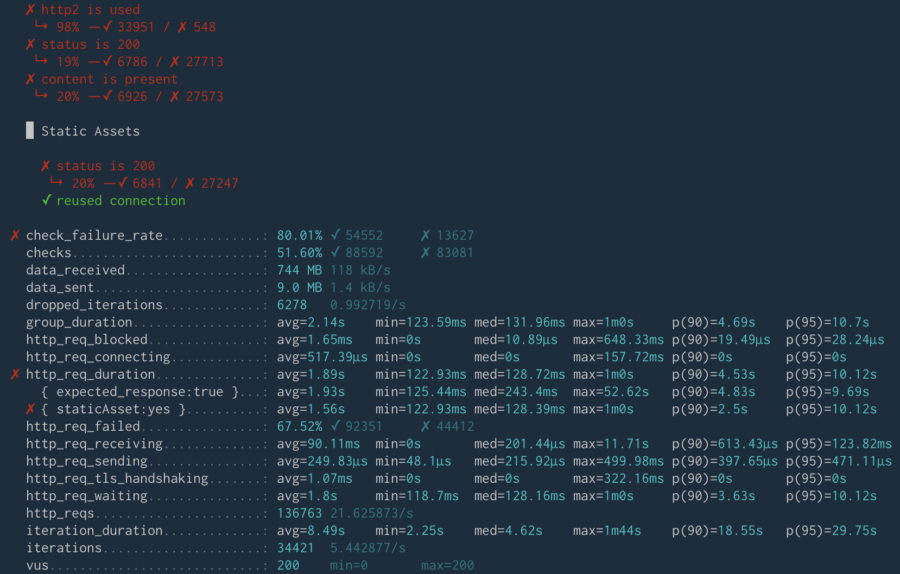 Now let's take a look at the situation from the perspective of the website. But how to set up the website monitoring? WSP already got it covered. You don't need to do anything manually, it's fully automatic for every application you set up via WSP.

So all I need to do is to click the Monitoring button in the WSP user interface: 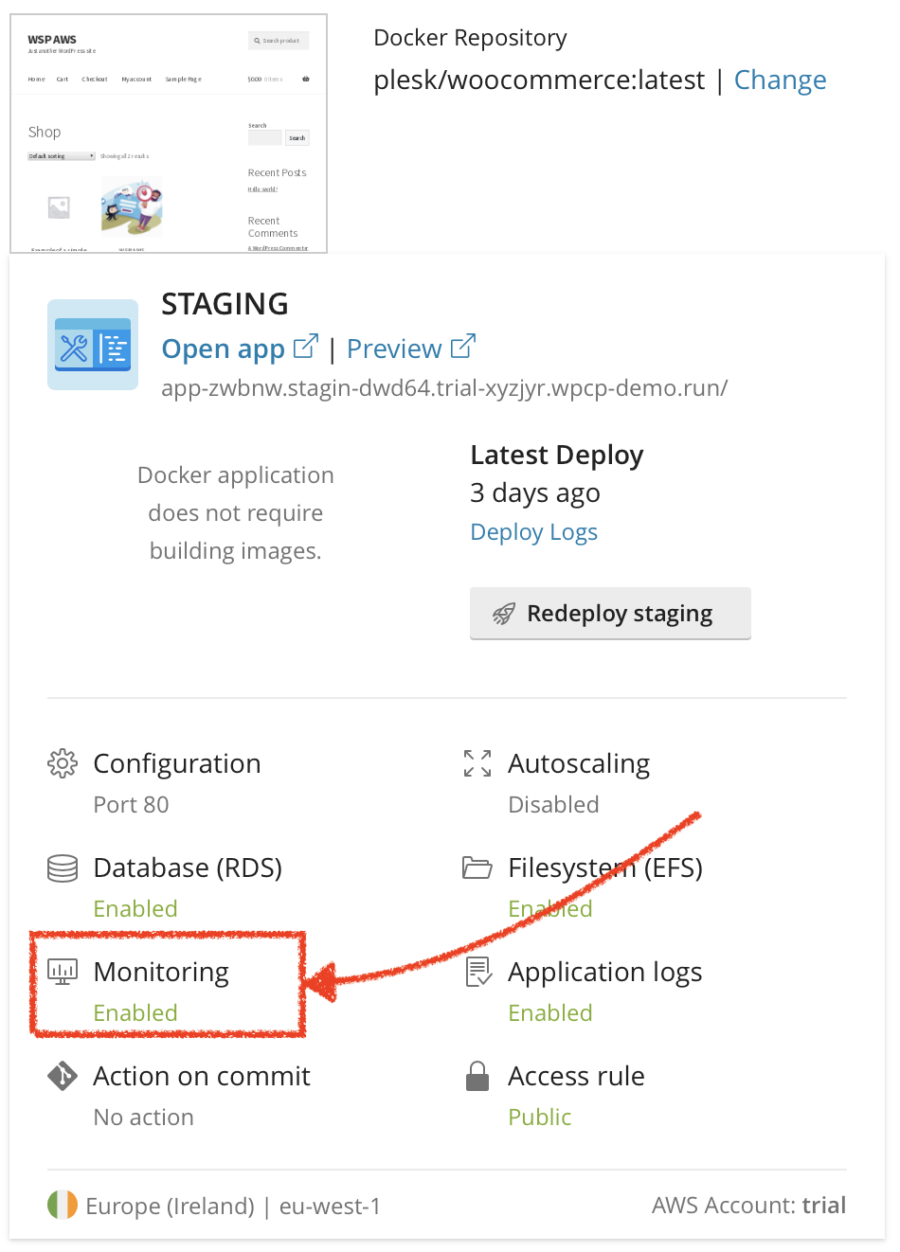 As you can see on this graph, my website started dying since 17:55 when the website's load rose from 20 to 40 concurrent users. Let's take a look at the resources consumption:

Oh, CPU usage hits 100%. That's not good at all. And that's the reason for the website to die. The Memory graph (RAM) contains many lines with different colors, which is the visual representation of how the High Availability infrastructure actually works. Do you remember the previous chapter where I explained why my website remains operational even during an update?

However, the new container could not handle so many requests because of the insufficient CPU performance. So the situation repeated again and again.

Those short color lines on the Memory graph are RAM consumption of the containers that started and died almost instantly under the load.

Let's make sure that my Database is feeling good and CPU overuse is the only reason. To do so, take a look at the RDS metrics on the default WSP dashboard:

Yep, RDS is pretty OK with such load.

Along with health metrics, WSP brings the graphs with billing information to Grafana connected to my WooCommerce. Let's see the costs of the website under such load.

Note: The billing dashboards are recalculated once a day. It's the way AWS works. 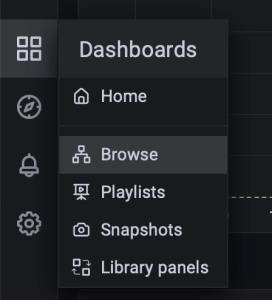 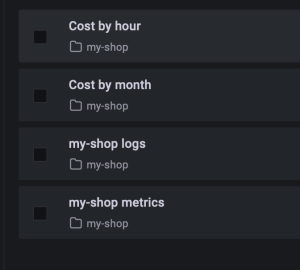 My stress test took 2 hours (moreover, the RPS Wave phase was performed during the second hour) so the "Cost by hour" view is quite useful in my case.

The dashboard contains two graphs because several apps can be run in the same environment. An environment includes some shared resources required for the infrastructure (e.g., Load Balancer, DNS, and so on) plus "Monitoring" and "Logging". On the graph below, you can view the graphs for the all tests that I ran. That's FYI, I just wanted to show how it could look: 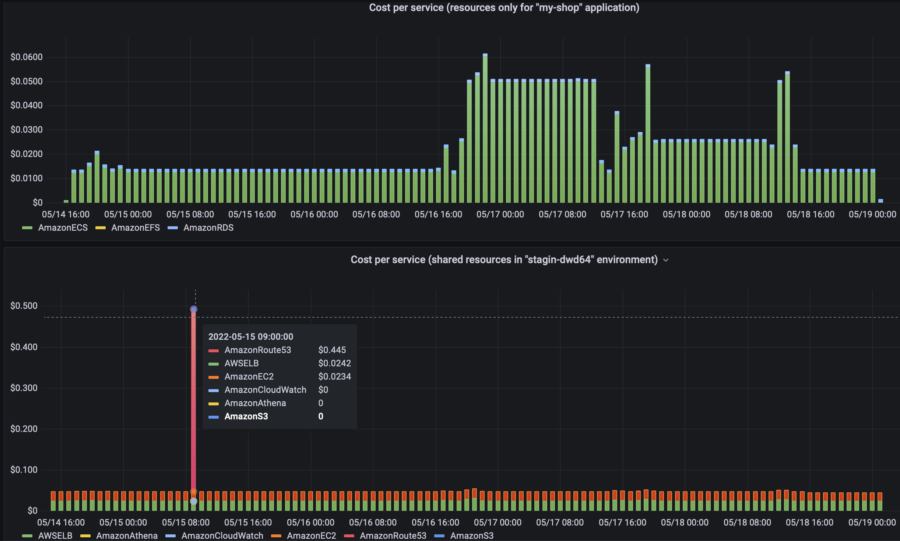 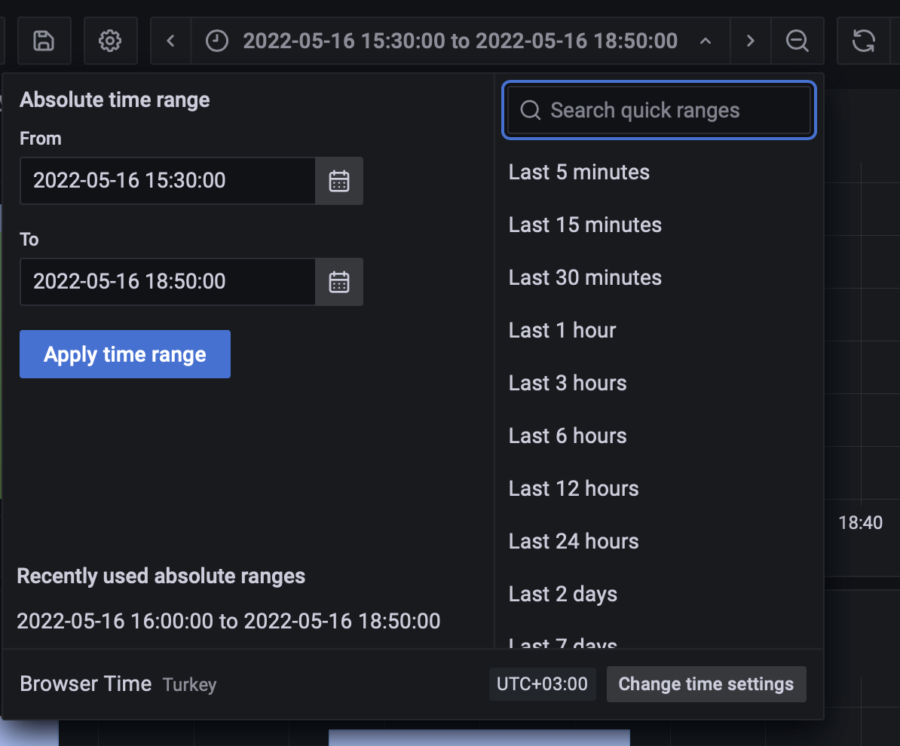 What can I do to make my WooCommerce survive more users? Of course, I can increase the amount of resources, e.g. CPU and RAM. Well, why not. Let's do it and run the test again.

I am setting CPU to 1vCPU, which is x4 times more powerful than it was in the previous test. RAM is set to 2Gb automatically because AWS ECS/Fargate doesn't allow using 0.5vCPU with 512Mb RAM. Since I've changed the parameters, now I need to deploy the changes. Don't worry to miss this aspect, WSP will remind you about it. 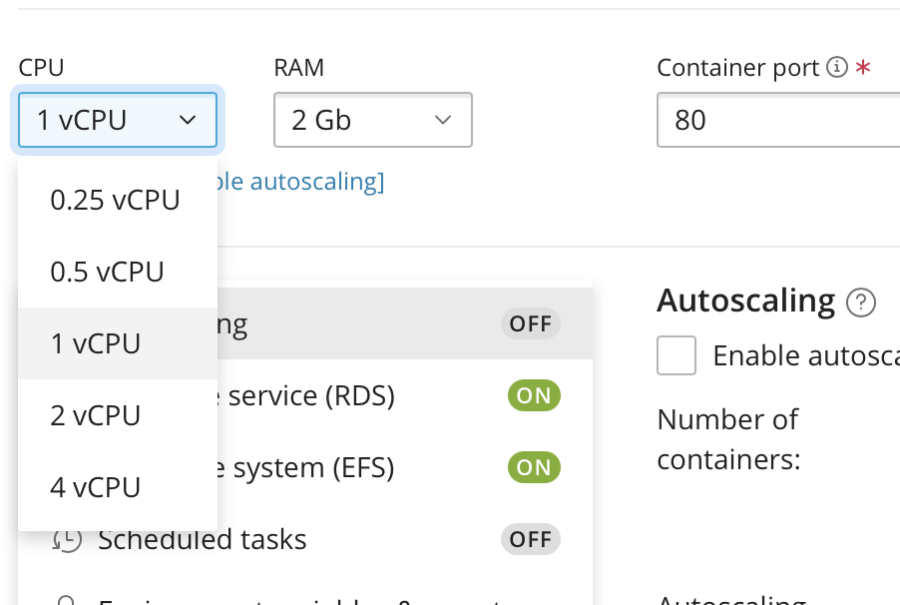 After deploying the changes, I started the same test. You can explore the results in the summary table below.

Another way to prepare for the load is to configure Autoscaling. We know that CPU performance is the problem so let's configure the system so that it will add more containers when CPU is about to be overloaded. Having WSP, it's a five-seconds task.

I am restoring the resources to its lowest values and enabling "Autoscaling": 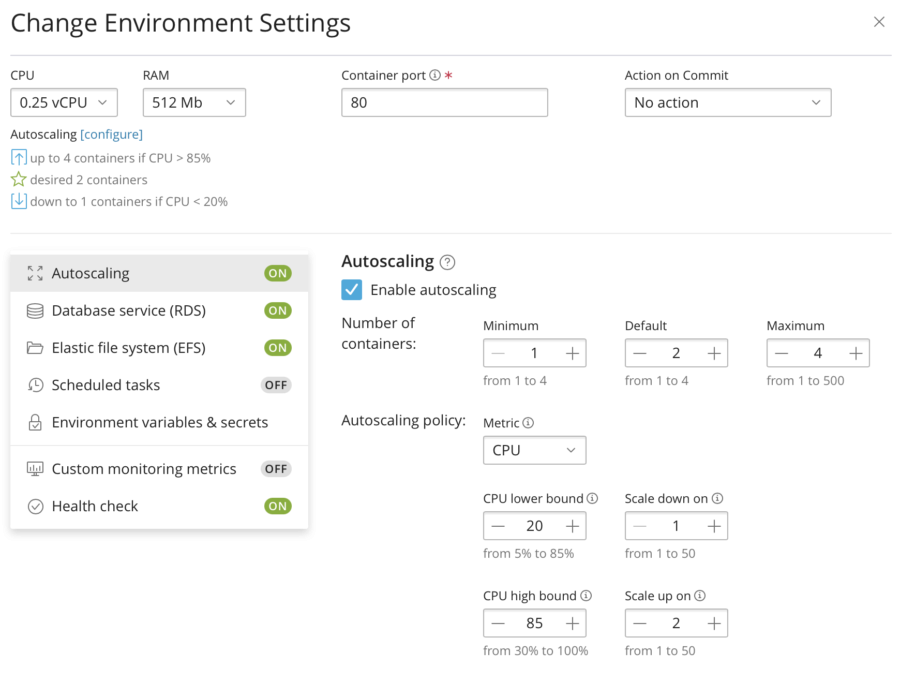 So if the CPU load (average per all running containers) goes above 85%, AWS ECS/Fargate should add up to 4 containers (we've used x4-vertical scaling so let's now try the same x4 for horizontal scaling). If the CPU load gets lower than 20%, the containers will be stopped (to save my money).

Now I shall wait for deploy and run the test again.

Response time (the lower the better) 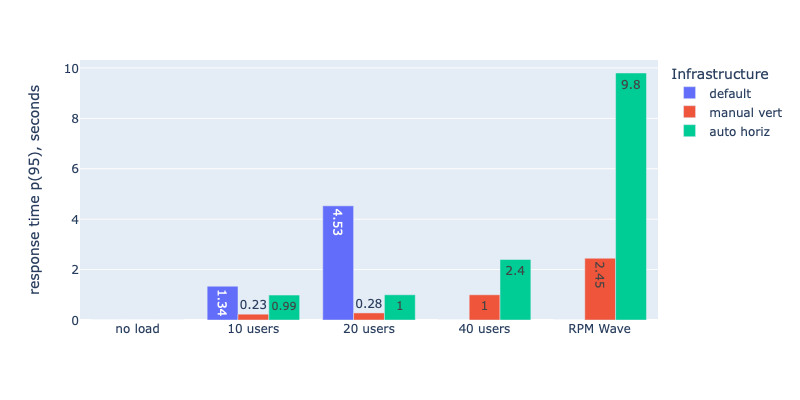 Average RPS (the higher the better) 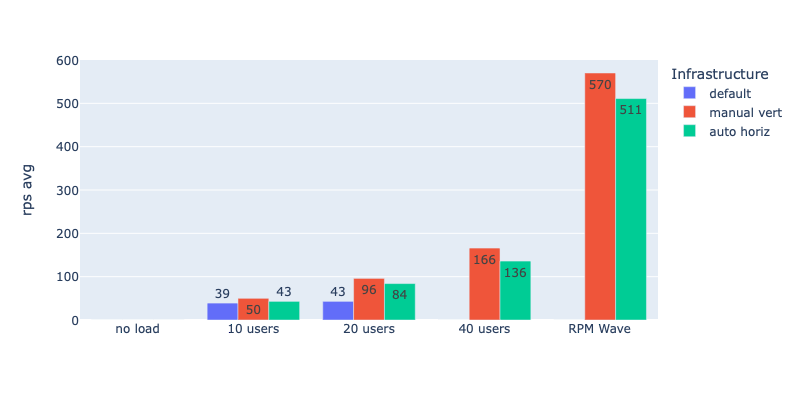 Costs (the lower the better) 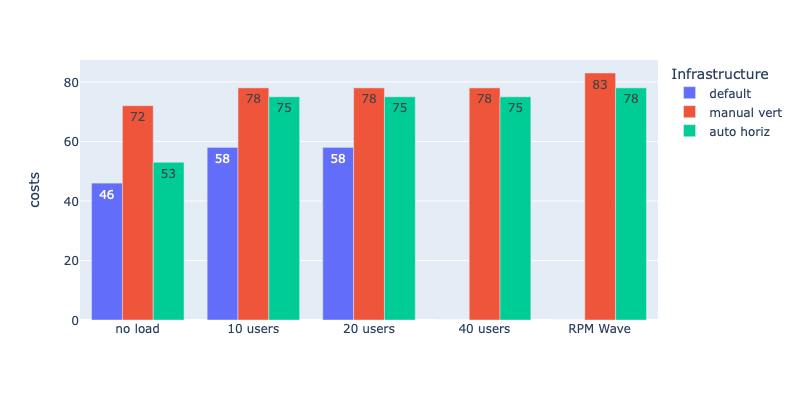 According to my stress test, Horizontal Autoscaling makes no sense in terms of performance. It shows much worse results compared to Manual Vertical Scaling. Yes, autoscaling is a bit cheaper, and yes, you can set it up and not worry about the load (with manual vertical scaling, you have to monitor the load and react manually or acquire a large lot of resources from the very beginning and pay for them even if the load is low).

But that sounds ridiculous! Robots lose a home game against humans? Nonsense!

Do you understand why using Horizontal Autoscaling would be a loss? What was the mistake? How to fix it? Share your opinion in the comments and wait for the next chapter where I will answer these questions!

For the sake of your convenience, I have divided my article into three chapters: